This is it! This is your lucky machine!

After a few weeks of staring out of my cancer booth, I had a chance to become a full-fledged video lottery cashier, which came with a pay raise and a ridiculous amount more in tips. Something important to remember about casino life in the early 2000s, at least in West Virginia: our tips were “gifts” from patrons. Translation? We didn’t claim them. Here’s the scenario: if you make, say, $8/hr for a base pay and you have even the smallest amount of the Gift of Gab, you will easily make another $8/hr per hour in tips, which effectively doubles your take. Any cashier with an actual personality made more than $100 per day in tips, which, when combined with his or her take-home pay after health care, insurance, and $100 more worth of random deductions came out, made for pretty impressive earnings. For being a cashier. In a place where customers weren’t actually buying anything. The shit was unbelievable.

I’d like to take a moment to explain something to those of you who might happen upon this post but have not worked a customer service job…the seemingly friendly folks on the other side of your transaction hate you. Maybe not in a permanent, they-actually-hope-you-go-to-Hell kind of hate, but it’s not too far from it. No, it isn’t your fault, unless you’re an asshole. See, there is a dynamic at play, dear guest, and it can be reduced to this: you’re spending money, and the facilitator of your transaction would also like to spend money. However, he or she cannot, as the balance at that moment is that you are the consumer, and he or she is part of the pleasure of the provided service or product. And dear God, what a sickening display. Forget about regular, even necessary transactions, like buying something at the grocery store, or pumping gas, or even copping that skunk weed from your hillbilly dealer. I’m talking about an entirely different form of consumption, and people outside of casino life may not be able to fathom this, so strap in for a minute.

The rules of commerce, polite societal exchanges, and the underlying principles of behavior governing otherwise decent human beings go right out the window when it comes to money transactions in a casino. Gamblers are junkies. There is no other way to describe it. The American Psychiatric Association updated the DSM-5 to classify gambling as an addiction, as opposed to its previous designation as a compulsion. Now, before you offer some ridiculous opinion on how gambling is okay, stop. The APA is smarter than you. It is smarter than I am. No excuses here. Neuroscience wins.

Dopamine feels good, Fam! Lemme get some more! Just one more win, so I can get break even! And some lucky bills!

Those of you who have been in customer service know. It’s just one of those things. Kevin Smith covered it in Clerks, and the staff in Ryan Reynold’s Waiting are amazingly accurate. It doesn’t make any sense, but if we have to wait on you, there is contempt. I’m sure all of us know one customer service provider who is genuinely happy with his or her life, but I’m not writing about those kind of people. They are deranged. Who could be happy running coins through a machine and fingering Cleveland sweaty bra money all day? Oh, sure. Load up on that hand sanitizer. Won’t make any damn difference. You’ll forget and rub your nose, or maybe even use the back of your hand for an itch near your eye. Mucous membranes, jagoff. Casino SARS for you. I can’t tell you how many times someone in that damn cage had whooping cough or some other shit from the 1800s. On top of that, for some unknown reason, most of the cashiers smoked the same shit cigarettes they also inhaled secondhand from the doomed customers! It was unreal. My blood pressure is skyrocketing as I relive it. Okay, let’s focus. Here’s a typical cashier transaction, mid-shift:

Where the hell did these guests come from? Is this a Cleveland bus?

The girls in the Players’ Club said they watched six buses unload this morning.

Jeezus, dude. That’s it, then. They’ll be with us most of our shift. There goes my tips.

HI, Mrs. Wallace! How is your day? How are the machines treating you?

Now, obviously Mrs. Wallace is an alias. Mrs. Wallace represents anyone who comes to the cashier window. All cashiers working a window are like Amsterdam whores. We want you to like what you see, so you’ll give us some money. We’ll even give you a little conversation and pretend like we’re not praying for a giant meteor to crash through the ceiling and seal everyone’s fate at that exact second. And it’s all for an extra buck. Every transaction, for the entire shift. Do you know what kind of psychological fortitude it takes to pretend to be interested in some gambler’s winnings? It’s sickening. And we all did it. For months. Many did it for years and years. Anyway, I can’t describe to you the potentials level of self-loathing that can grow in such customer service positions. Towards the end, I couldn’t tell what I hated worse: the fact that I allowed myself to get accustomed to such bullshit to make a rather obscene amount of money, or the fact that I can recall what it feels like so easily. Moving on…

Oh, I’m so sorry to hear that, Mrs. Wallace. Here, let me give you some lucky fives. (Insert a signature customer service move, the most popular of which is a hearty flick or bizarre and meaningless charlatan hand gesture on the filthy bills)

Now get back out there and make some money! HA HA HA (Mrs. Wallace leaves, smiling)

Dude…that was kind of sickening.

Yup, it was. And she gave me a five. Now kill yourself. 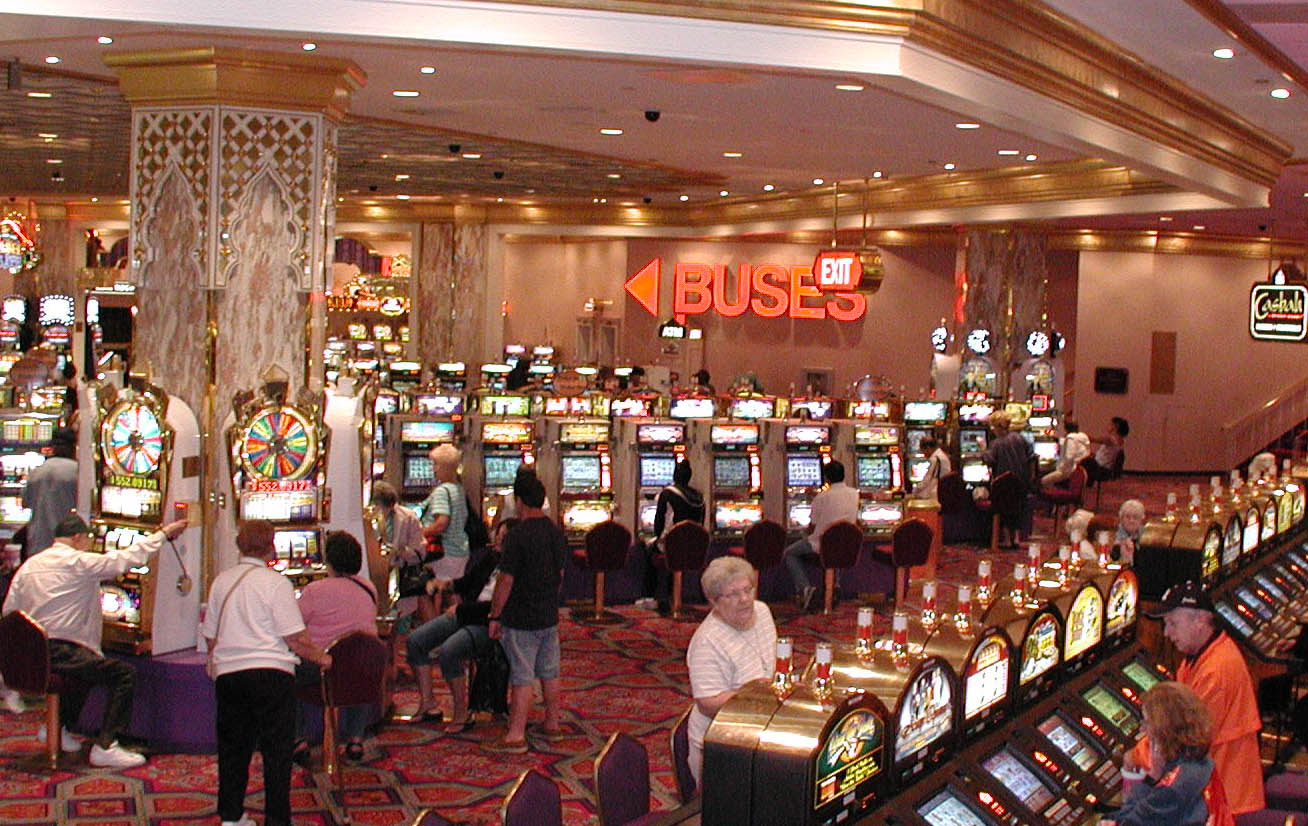 No, Mrs. Wallace. Those weren’t really lucky fives. And those machines are programmed to take your money. But I’ll smile just the same and grovel to you every time you come back to the window. For a dollar. Every time. Ugh.

In high school, I worked in fast food. More than once. I used to think those were the worst jobs. They’re not. At least some fat ass is getting a fix on the horsemeat Whopper I hand him through the window. In the drive-thru window, we either wore a headset or stayed hunched over a microphone, droning orders to the sandwich preppers. Always with a Diet Coke, too. The noise of those shitty drive-thru communication systems sounds like Vivaldi when compared to the CLINGETY-CLING-JINGLEY-JANGLE of a coin hopper. Modern casinos utilize ticket systems. Coin hoppers have been gone from machines like those in the picture above for a long, long time. But they were alive and well when I was a cashier. We stood there in our little vesties, and we smiled, and we loathed the sight of almost everyone on the other side of that cage. And it got so much worse.