38 is a pretty boring age, I think. I don’t know anyone in their late thirties who are doing things that are challenging. I’m not talking about an exercise regimen or any other kind of temporary escape or distraction, either. I’m talking big things. Shifts-of-reality things. My thirties have been a strange time, to be sure. Twenty-somethings are still discovering all kinds of stuff, and some forty-somethings are already beginning to reap the rewards of years of hard work. Then there’s the rest of us. We’re in some kind of holding pattern. Some kind of wait-and-see. I’m not into it.

To be fair, a lot of thirty-somethings have kids. That’s a game-changer, as everything becomes about the kid(s) as soon as that reality changes. If you make a list of people you know who have kids, a significant portion of their lives (calculated daily, weekly, monthly–whatever) goes toward the preservation and promotion of the kid(s). I get it. I sure as shit wouldn’t want to be a kid right now, either. Terrible music, a shit president, and a pretty rotten culture all-around. I’m also sure the same was said about my scene when I was younger. That’s the way it goes. I’m worried about the inherent cruise control effect that seems to go along with this part of my life.

The Ohio Valley Formula for living seemed to be something like this:

B. Work that job, and raise a family.

C. Retire from that “good” job and enjoy life, presumably until the age of death.

I have a big problem with the Ohio Valley Formula. I think a lot of people my age might have a problem with this formula, too, but there doesn’t seem to be a lot of people talking about that. I also don’t know anyone who casually discusses the giant timeline of whatever-age-they-are-now and age 59 1/2. So, what exactly is going on?

Does everyone have that “good” job? Tell the truth. And also, please tell me where to get that “good” job. I’d love to put in my resignation and sign up for the new/other scene. We don’t have kids, though, so I’m not sure that my metrics match yours. I also don’t really care about that “good pension,” either, so if that is part of your formula, I have to keep looking.

Do you know a lot of healthy retired 59 1/2-year-olds, up to age 70? Really? Are they spry? Traveling? Exploring? No. No, I don’t think they are. Why do we pretend that working for 30 years and progressively giving up things is a good way to spend half of our lives?

Here’s a big shift: I don’t know anyone talking about being financially independent. We talk a lot about jobs, and what we want to buy, but no one seems to really care to discuss what life would look like if we actually got to dictate the majority of it. It’s overwhelming and empowering at the same time. As with anything of value, there’s a catch: we have to rewire our brains and behavior, and we have to swim against the tide to pull it off. Being financially independent looks different to everyone. For some, it’s a certain financial number arrived at through luck, investment, inheritance, or some other method. I’m not even sure what my magic number would be right now, as we still have a little bit of debt which will soon be gone. I have a working number buried deeply, but it will take one more career shift and some behavioral maintenance, combined with some investment before I can reassess that value.

What is the difference between “financially independent” and “retirement,” anyway? I don’t know any retirees that say, “I’m financially independent.” To the contrary, retirees are financially dependent on the pensions or retirement plans that they worked decades to obtain. Nobody says, “I want to be dependent on the fixed income I worked most of my adult life to obtain.” Not only is that incredibly unappealing from an I’m-allegedly-a-sentient-being point of view, but it doesn’t exactly say “free will.” To me, it says, here is the amount I hope sustains me after years of potentially doing things I don’t want to do. That bothers me.

I have been citing Office Space too much lately, and I know it. Peter Gibbons is the perfect everyman, though. He works a job he finds unfulfilling but that is otherwise considered a “good” job. Condo, Japanese econobox Corolla, girlfriend. He’s not feeling the cruise control, and the hypnosis session that ends with Dr. Swanson’s death makes for good comedy as Peter stays zonked out and inadvertently is provided with an Out from his life. The film is also nearly twenty years old, and it’s still good. It’s probably Mike Judge’s best work.

Confession: this is all a long wind-up for me to leave education, an industry that I find deeply unsatisfying, especially in my current capacity and in my incredibly strange locale. That’s a story for another time. But I wanted to jot down some thoughts, if for nothing else than to send out low currents to see if anyone else needs sparks. I don’t have decades to spare. I’m only setting up for 59 1/2 if I have to. I think I can lower that milestone by a few years, or–at the very least–I can stroll toward that marker on my own terms.

I took a stroll through an email account looking for some financial numbers, and I found a lot of emails suggesting that more had changed in this last year than in previous end-of-years, but overall, I think I holstered my guns too soon for too many years. I think it’s time to break them out again, Holliday-style.

Here are some of the things I read the past month that steered me here: 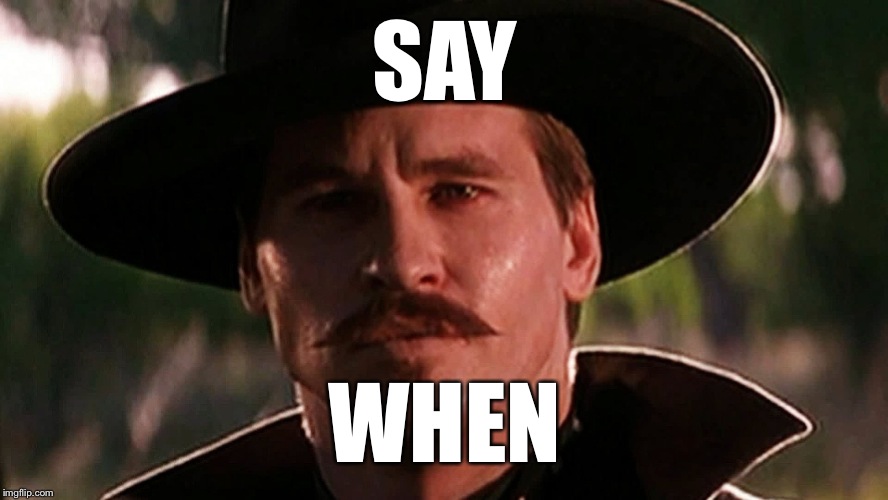 1 thought on “Year of the Shooter”