278 days remaining. That’s weekends, holidays, the whole shebang. You can pretty much put up with anything for less than 300 days. That’s what I tell myself.

At the trash-fire I call “work,” my job description changed again today. This time the changes are in writing. I was quiet about it at first, then waves of anger surged through me, and then I thought of the best career/life advice I’ve read recently–it was from reddit, of all places. Someone made an ecard for it, of course: 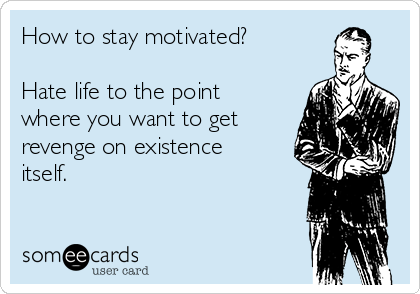 So there it is. That’s real life. And that’s my main strategy for leaving education.

My Winter Contingency. It’ll do the job quite nicely.

Day five without AC. The weather’s been mild this week, thanks to Hurricane Harvey destroying coastal Texas. As long as I can sleep at night, I can deal. No sleep? Not good. Not the best version of me. Unfit for public display.

Owning a house was a real pain in the ass, because everything was on you, the owner, when it went wrong. And it always did. For the most part, I’m happy to rent again, but…listen…we need to talk about this whole Southern Pacing situation. For years, I have heard, “Well, now, folks just move along at their own pace down heah.” This is a standard explanation served up when speed or efficacy is questioned.

“Hey, Mister or Missus First Name (also a favorite), get the fucking job done.” Try that. But no, no…I get it. You’re just moving at your own pace heah.

Lots of changes lately. At some point, I’ll probably get back into cognitive behavioral therapy, as it is the only thing in the last four years that helped me produce accelerated results. Nobody needs to sail into 40 still needing to figure out a bunch of things. Ridiculous.

I never liked running in general, but the treadmills in the exercise room six doors down have inclines that go up to “15.” That’s pretty insane, and the calories burned add up quickly. Hey, it’s something. Combine tempo treadmill training with an elliptical workout (which I never thought I would use as an adult male) I add in a light circuit here and there and sweat really starts to pour, like in a gross way. I like to toss in an occasional Brad Pitt move from “Burn After Reading” to keep it interesting.

I put up a hard half-hour or a little longer, which helps me forget the aforementioned trash fire, and then I walk right out of the exercise room and jump into the pool, which will probably close in just over a month. Tonight the pool had too much floating in it, and the pumps haven’t been running since last week. I suppose someone’s “fixin to get along after that too,” at their own pace, of course.